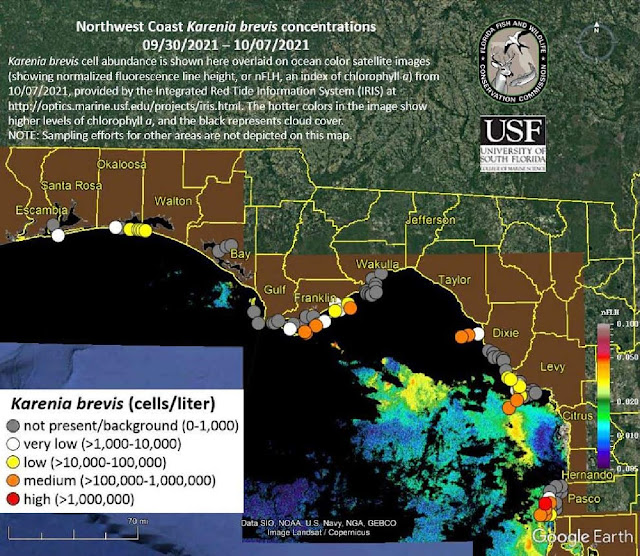 The Florida Fish and Wildlife Conservation Commission has confirmed that red tide is present off of Franklin County's coast.

On Friday the FWC released its most recent testing information – water samples were taken on October 4th, 5th and 6th.

The highest concentrations of red tide were found at the Bob Sikes Cut, Southeast of the bob sikes cut, at the public beach area on St. George Island and at the state park on St. George island.

Red tide was found in low concentrations off East Pass and off of Dog island at St. George Sound.

Red tide was found in very low concentrations at West Pass, at the Goose Island boat Ramp, at areas around Dog Island and at Carrabelle Beach.

Red tide was found in background concentrations at the old St. George Island causeway, and at the Alligator Harbor Boat ramp.

Red tide was not found in eaither Gulf or Wakulla Counties.

Red Tide is an organism known a Karenia Brevis that in large enough concentrations releases a neurotoxin that can kill fish and even affect people.

Red tide generally causes skin irritation and irritation in the lungs and throats in humans.

People should take precautions, especially when walking along the beach.

People with breathing conditions or asthma should stay off the beach, and everyone should stay away from dead fish that are washing on the shore.

Also don't harvest or eat shellfish or any distressed fish.