http://live.oysterradio.com/
at 9:58 PM No comments: Links to this post 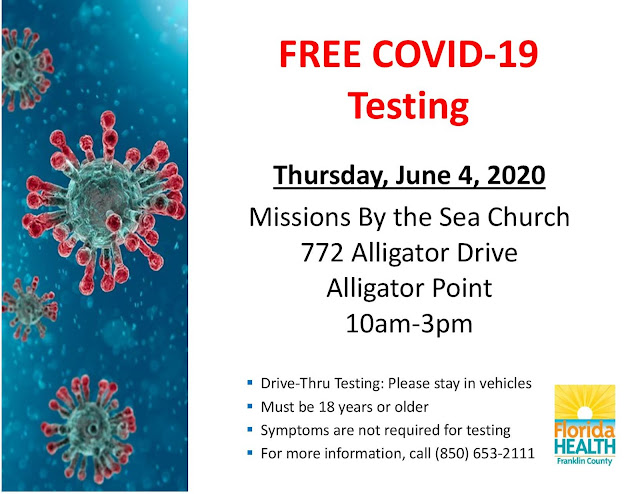 http://live.oysterradio.com/
at 4:17 PM No comments: Links to this post

Attached you will find our daily update that has been shared on the Franklin County Florida Emergency Management Facebook page. This top pinned post will be updated each day. In addition, it will be emailed to our community distribution list to ensure we are reaching as many community members as possible.  For updates sent directly to your phone text FranklinCV19 to 888777.

Please note: The demand for the testing and designated laboratory, may cause a slight delay in reporting as reflected on the Florida COVID-19 Dashboard.

As always, please share this tool and the attachments with your coworkers, partners, friends and relatives as we need to all be educated on the facts. We know that informed people make better decisions, so please help us to eliminate miscommunication and rumors by informing our community. We will keep each and every one of you updated as new information becomes available.


http://live.oysterradio.com/
at 4:14 PM No comments: Links to this post 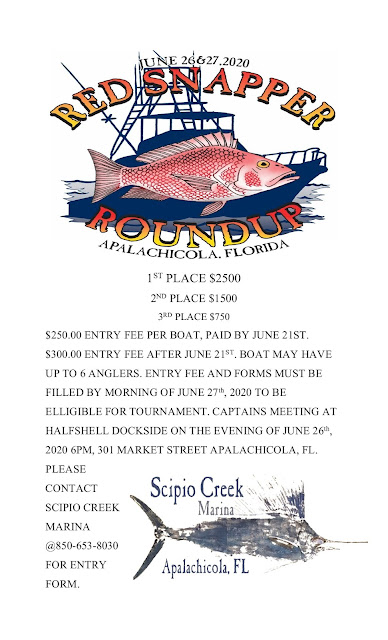 http://live.oysterradio.com/
at 4:06 PM No comments: Links to this post

Beach parking at Alligator Point, and to a lesser degree St. George Island, remains a big issue for Franklin County

Beach parking at Alligator Point, and to a lesser degree St. George Island, remains a big issue for Franklin County and the county commission is now looking at long-term solutions for the problem.

Sheriff AJ Smith raised the issue at Tuesday's County Commission meeting, asking if the county could hire parking attendants for the two locations so that deputies would not have to spend so much time dealing with parking issues.

The county has already allowed local towing companies to roam and remove vehicles parked illegally without getting deputies involved – but it's not enough.

The sheriff said we are seeing record crowds, and every weekend recently feel like Memorial Day.

He said it is a waste of deputies time to write tickets because there are other crimes going on at the beaches that they should be dealing with like littering, indecent exposure, drunk driving and trespassing.

He estimated it would cost around 10 thousand dollar to have two people working through the summer, mainly on weekends during daylight hours.

The county, however, doesn't have the money for it but said they would approach some of the civic groups to see if they could help pay for the service.

The commission also considered using TDC funds for the program, but that's not an allowed used for Tourist Development dollars.

Commissioner Noah Lockley expressed frustration at that and pointed out that the TDC is in charge of bringing tourists to the county but when visitors get here they have no place to park.

The board also rejected using money from their reserve for contingency fund, because of fears that that money will be critical during hurricane season.

The sheriff said he will have to make parking violations a low priority for the time being.


Meanwhile county staff will begin looking at the issue and compiling information for a workshop where they hope to come up with a long term solution to the beach parking problem.

http://live.oysterradio.com/
at 3:58 PM No comments: Links to this post

State biologists are asking for the public's help in monitoring wild turkeys this summer.

The Sunshine State is home to healthy wild turkey populations.

They occur throughout Florida and prefer open forests and forest edges and openings.

The Florida Fish and Wildlife Conservation Commission is asking the public to report all wild turkeys they see during your normal daily activities from June 1st to August 31st.

They are interested in sightings of hens with and without young as well as male birds from all regions of the state, including rural and developed areas.

You can report wild turkey sightings on-line at myfwc.com.

http://live.oysterradio.com/
at 3:57 PM No comments: Links to this post

(Having trouble viewing this email? View it as a Web page.)

For immediate release: Second quarter 2020“Gone Coastal” columnBy Melissa Crouch
Suggested Tweet: When releasing deep-water fish, the right tools mean everything @MyFWC: https://content.govdelivery.com/accounts/FLFFWCC/bulletins/28ece00 #Florida #fishing
Descending Devices Video: https://www.youtube.com/watch?v=8wDsrzlh83I
When releasing deep-water fish, the right tools mean everything
It’s that time of year when you may be fishing for snapper and grouper. Continue your role as a conservationist when releasing fish by looking out for signs of barotrauma and being prepared to respond. Barotrauma is a condition seen in many fish caught at depths greater than 50 feet caused by pressure changes leading to an expansion of gases in the swim bladder. Signs of barotrauma include the stomach coming out of the mouth, bloated belly, distended intestines and bulging eyes. 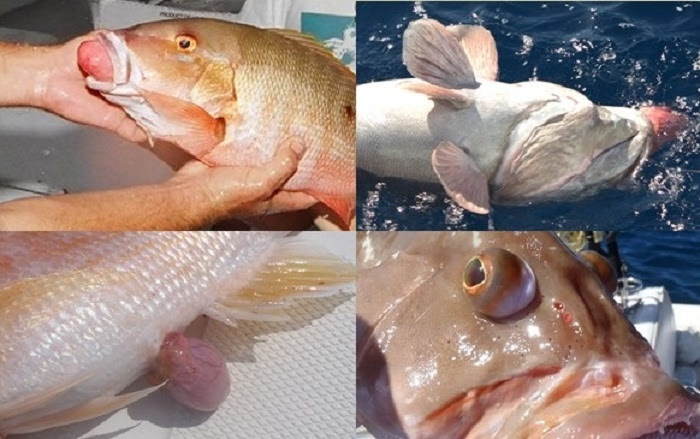 Signs of barotrauma include the stomach coming out of the mouth, bloated belly, distended intestines and bulging eyes. Photos by Florida Sea Grant.
Barotrauma can cause damage to internal organs and can be fatal unless appropriate steps are taken. It’s important to know in advance what tools are available and how to use them to help fish return to the bottom and increase their chances of survival.
Descending devices take fish back down to a depth where increased pressure from the water will recompress swim bladder gases. They fall into three categories: mouth clamps, inverted hooks and fish elevators. With proper set-up and practice, descending devices can be easy to use and make a big impact on the survival of released fish. Learn more about descending devices and how to use them at MyFWC.com/SaltwaterFishing by clicking on the “Descending Devices” playlist. Descending devices return fish to a depth where gases in the body cavity can recompress.
Venting tools are sharpened, hollow instruments that treat barotrauma by releasing expanded gas from the swim bladder, enabling the fish to swim back down.
Please note, items such as fillet knives, ice picks, screwdrivers and gaffs are not venting tools and should never be used to vent a fish. Venting a fish incorrectly may cause more harm than good.
To properly vent, lay the fish on its side (on a cool, wet surface). Venting tools should be inserted 1-2 inches behind the base of the pectoral fin, under a scale at a 45-degree angle, just deep enough to release trapped gasses. Never insert venting tools into a fish’s belly, back or stomach that may be protruding from the mouth. Learn how to vent properly by visiting https://youtu.be/jhkzv1_2Bpc. 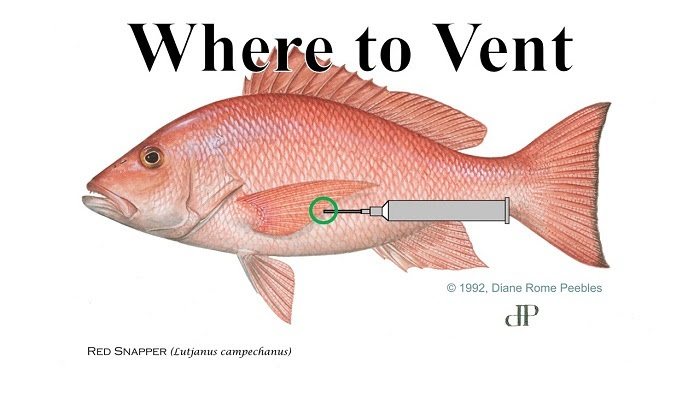 Venting tools should be inserted 1-2 inches behind the base of the pectoral fin, under a scale at a 45-degree angle, just deep enough to release trapped gasses.
Descending devices and venting tools should only be used when fish show one or more signs of barotrauma and cannot swim back down on their own. It is essential to work quickly when using these tools and return the fish to the water as soon as possible. Anglers should choose the device and method they are most comfortable with and that best fits the situation.
Anglers should also use proper gear when fishing for reef fish. Non-stainless steel inline (non-offset) circle hooks with the barb crimped down often hook in the mouth rather than the gut, making it easier to release fish. Dehooking tools also help quickly release fish so you can get back to fishing for that big one in no time. Using the right tools and acting quickly will make a big difference in the survival of fish you release. To learn about reef fish gear rules for circle hooks and dehooking tools, visit MyFWC.com/Marine and click on “Recreational Regulations,” then click “Gear Rules” under the Reef Fish tab. 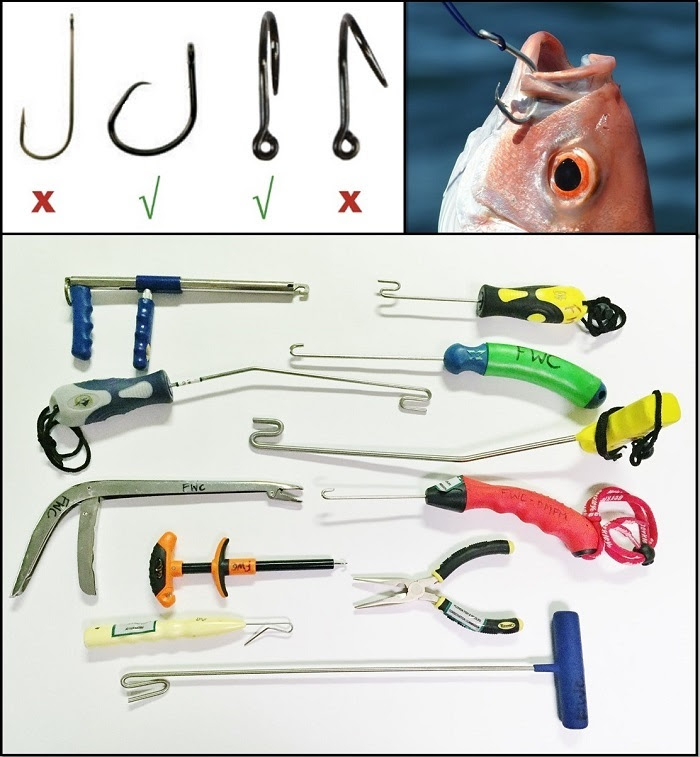 Non-stainless steel inline circle hooks with the barb crimped down and dehooking tools should be used to help quickly release fish and increase their chances of survival.
To learn more about proper fish handling techniques, visit MyFWC.com/FishHandling. Check out our descending devices playlist to learn more about barotrauma, descending devices and venting tools. And visit our YouTube channel at MyFWC.com/SaltwaterFishing for more saltwater fishing how-to videos. For answers to questions, contact 850-487-0554 or Marine@MyFWC.com.

http://live.oysterradio.com/
at 2:34 PM No comments: Links to this post

The Franklin County Dixie Youth league has the go-ahead to start playing ball.

The Franklin County Dixie Youth league has the go-ahead to start playing ball.

Franklin County Commissioners have signed off on the League's plan to reopen the baseball and softball season for local children.

At this point the games will only be played in-county against other teams from around the county.

There have been some discussions about out-of-county play, but nothing has been decided yet, and that would require further approval.

Parents will have to sign a COVID-19 waiver to allow their children to play.

There will also be a waiver to protect the county from any legal action.

It will be up to the league to insure that the restrooms and other locations remain clean and people will have to adhere to social distancing guidelines.

As commission chairman Noah Lockley said, “The COVID is still out there.”


The county may also have parks and rec workers attend the games, at least initially, to insure that all guidelines are being met.


http://live.oysterradio.com/
at 2:10 PM No comments: Links to this post

The 2020 Atlantic Hurricane Season has officially started and the Florida Attorney General's office has released a useful hurricane survival guide that you can see on-line.

Entering hurricane season with already two named storms, the National Oceanic and Atmospheric Administration is predicting the 2020 Atlantic Hurricane Season to be “extremely active” with 13 to 19 named storms.

The Attorney General’s Hurricane Guide could serve as a useful tool to help families prepare with helpful tips, resources and information.

The guide includes information about how to avoid scams before and after a storm, a full supply list and other important preparation tips.

It also discusses issue like price-gouging as well as the large number of scams that occur after a storm including building and repair scams, well water testing scams and disaster relief scams.

The guide can be downloaded or read at myfloridalegal.com or just follow the link on this story at oysterradio.com.


http://live.oysterradio.com/
at 2:10 PM No comments: Links to this post

http://live.oysterradio.com/
at 12:54 PM No comments: Links to this post